It's been more than 2 years since I sat down to write something for this blog, and I'm not really sure where to start, but doing my first 5k a couple months ago is what motivated me to start writing again.  I've shared much of my journey with food addiction in this blog, and after reading my last post from 2015, I'm now ready to share the action I took to get me to this new life and hope that in doing so, someone else may find the hope they need to keep going on their journey. 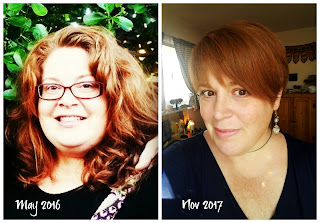 I knew moving to Santa Fe was an integral part in my physical, mental and spiritual journey. I just had a much different path in mind than the one I ended up on.  After gaining back all of the 65 lbs (and then some) I'd lost before moving to Santa Fe, I found myself weighing almost 400 lbs and feeling "Fat, Sick and Nearly Dead" (again).  I had stopped juicing and exercise was a thing of the past.  What little sleep I got was in a recliner because I couldn't breathe or get comfortable sleeping in a bed.  Then came the diagnoses.

In 2016, I was diagnosed with severe Sleep Apnea, Intracranial Hypertension (too much spinal fluid in my brain), high blood pressure and was pre-diabetic.  All of these were directly linked to my morbid obesity, they're even called, co-morbidities, and felt like I was hearing my own death knell.  So, I started doing research and found my way back to seriously considering Weight Loss Surgery. I had been down this path in my 30s but it wasn't the right choice for me then.  Two years ago it became the light at the end of a long and painful tunnel.

One of the reasons I decided to write about this part of my journey is because I want to share what I learned about a hormone called, ghrelin, also know as the Hunger Hormone.  After reading several studies, I started to understand why, no matter how much I ate, I always felt hungry.  I now understand that my stomach was most likely always producing ghrelin, which meant that my brain was always being told to eat.  I started to feel hopeful because the research I found concluded that many patients who had Gastric Sleeve Surgery stopped producing ghrelin for a time after surgery because the part of the stomach that produces it is removed from the body.

In January of 2017, I met with a surgeon in Albuquerque and spent the next few months working on accepting that I needed such extreme help.  I've always been pretty extreme in my weight loss efforts though (65 day juice fast, 21 day water fast, 5 years of not eating sugar, flour or wheat, etc.), so it's really not surprising that I ended up on a surgeon's table.  I still had to process a plethora of pre-surgery feelings though, including:  feeling like a failure, fear of the surgery itself, anger at needing the help of western medicine, which I felt had contributed to my obesity, and mostly it just felt like I was cheating.  Cheating because my whole life everyone said that if I just ate less and exercised more, weight wouldn't be a problem.  Turns out everyone was partially right, it just took having 75% of my stomach (a.k.a. my little ghrelin maker) removed so that my brain would actually be capable of functioning in a way that allowed me to eat less and exercise more. 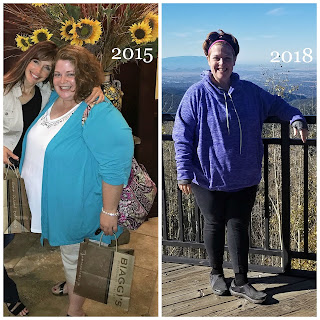 On May 2, 2017, I faced all of my fears and had the surgery.  Today I am 150lbs lighter and just got up early a few days ago to do my second 5k on Thanksgiving morning. I still have 80lbs or so to release, but the life I have today is better than I could have imagined.  I am still a food addict and I still have to be vigilant about not using food to soothe my emotions.  But now, not only do I have a smaller stomach, I also seem to have a "normal" brain as far as hunger is concerned and I no longer spend all of my time overriding constant "food thoughts." Thoughts that I now know were often produced by the excess ghrelin in my system.  I am not advocating weight loss surgery for anyone.  I simply know that this particular surgery was the right choice for me and I that it helped me save my own life.  I hope that by sharing my story, it will help someone who is struggling with obesity find the hope and encouragement they need to save their own life. 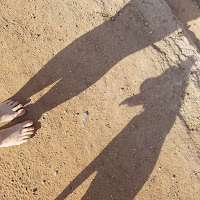 Two years ago I couldn't walk 25 feet to my mailbox without getting worn out.  In March of this year I started walking on the trails again in my beloved high desert.  With the help and encouragement of my "outdoorsy" friends and an unofficial barefoot running coach, I find myself on a lot of new trails. I don't know where the rest of this path will lead me, but I know it will be on a trail somewhere and I'll probably be barefoot.

Posted by Shannon Baker at 5:20 PM